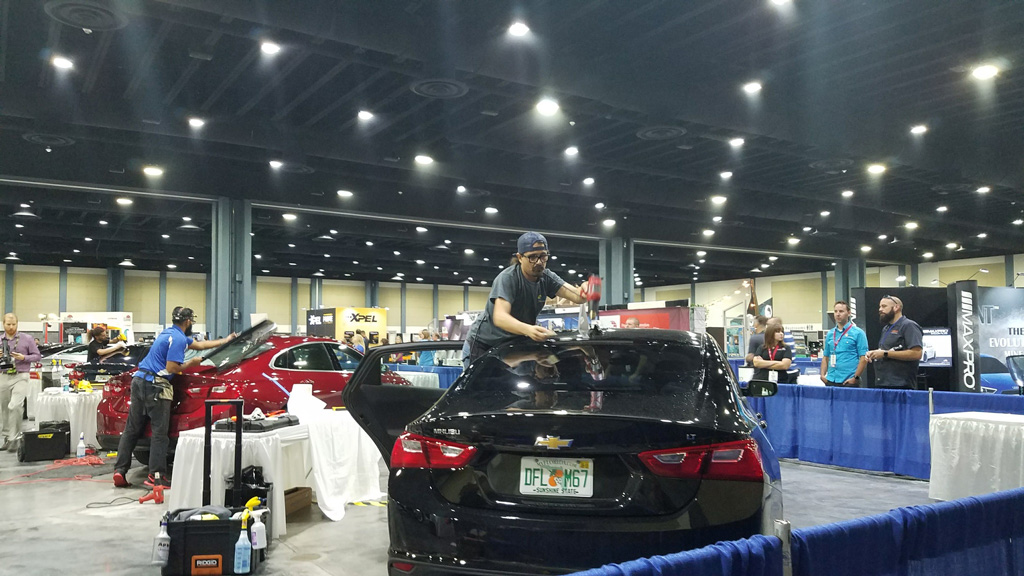 When we mention that Sal won an international window tinting competition in 2017, most people are full of questions. “That's a real thing? What do you tint? How do you win?”

The International Window Film Conference and Tint-off is sponsored and organized by Window Film Magazine. At this event, tinters gather from around the globe to test their skills in both automotive and architectural divisions.

Although each year is a little different, the automotive competition usually involves tinting one car door in the preliminary round, and a more challenging window (like a back glass/vent combo) in the finals. Judging is quality-based and there is a time limit, which is considered in the event of a tie. The three judges are industry veterans quipped with wax pencils and clipboards. Together they examine one window at a time, deducting points for debris, light gaps, etc. In 2017, there were 96 competitors in the automotive preliminaries, with the top 12 scores advancing to the final rounds. Sal brought home the gold medal and the title of the “World's Best Automotive Tinter”.

The architectural division is set up similarly, using mock-up commercial window frames. The preliminary round involves tinting one large pane of glass, like you might find in a store or home. Then tinters are further challenged in the final rounds. Last year the finals involved tinting a trapezoid shaped transom window, and past rounds have called for seaming two pieces of window film together. In addition to his automotive win, Sal was awarded the bronze medal in the architectural division.

This event is held in a different city each year, alongside our industry's biggest trade show. It's a ton of fun, and always a learning experience!
‍
Winner interviews: https://www.windowfilmmag.com/2017/10/interviews-with-the-tint-off-champions/